What will be the Fortnite Player count in 2021?

Home » News » What will be the Fortnite Player count in 2021?
Fortnite

It has been three years since this game was out; and still Fortnite has quite an impressive fan base. Gamers often wonder about the Fortnite player count. They seem interested to know whether their favorite game is in the play or not. It can be seen that it is incredibly popular among teenagers even at the end of 2020, when 3 years have passed since it was released. Although, there are rumors that it is past its peak and now it is in its decline stage. Most of the developers do not tend to release this kind of information. Fortnite is an exception, every once in a while, some specific player base data is released by the developers. It only happens when the active members reach some kind of peak. The number of players have increased drastically over the years.

In March 2019, it was informed that over 250 million users play this game. In May 2020, 350 million was the total player count. A huge jump of 100 million in such a short period is quite remarkable. It cannot be denied that with each month passing, more people are downloading it and the count is increasing day by day. Now the developers, Epic Games, announced that, there would be a return of Fortnite World Cup in 2021. It is supposed that this edition of World Cup will be even bigger than the previous edition. The qualifiers will take place in March 2021, and the tournament will begin shortly after in June 2021. The venue is not announced yet, but will be announced after a month or so. This tournament can turn the table in Fortnite’s favor.

It is said that with the beginning of this World Cup, there will be a huge increase in the Player count. It might cross 500-million user landmark by the end of the 2021. In May 2020, Epic games announced that Fortnite had 350 million accounts, which are registered. Teenagers have spent 3.3 billion hours of playing this game during the month of April 2020. They repeated the same digit in August 2020. The worldwide state of affairs may have aided both these numbers, but there is no stopping at such striking figures. It can be said for the next year too because of the World Cup starting in March 2021. The players might spend more than 4.5 billion hours in those months in which FWC is happening.

How Many People Play Fortnite?

Epic Games does not provide any accurate information about how many people play Fortnite. No such information is shared online. However, in the recent times, when Fortnite was at its peak in 2020, they did share a statement. It says that the total Fortnite player count has crossed 350 million users. There is an increase in the count every time when a new season starts. When the new season arrives, it could see millions of mobile users keep off of Apple due to the ongoing quarrel between Apple and Epic Games. Epic games could see how many Fortnite users, who play this game on IOS, drop if all the iPhone users are unable to log in. The recent Travis Scott concert event tells us about the most recent number of people who play Fortnite. That gathered 12.3 million concurrent players online and all were active at the same time.

Concurrent players mean the ones who were all online at once. Active members in the game during the event were 12.3m, which is more than the Marshmallow concert that gathered 10.8 million players. The other count you will see mentioned everywhere is that Fortnite has 350m members in total, as of May 2020. That counts every registered account, active or inactive. 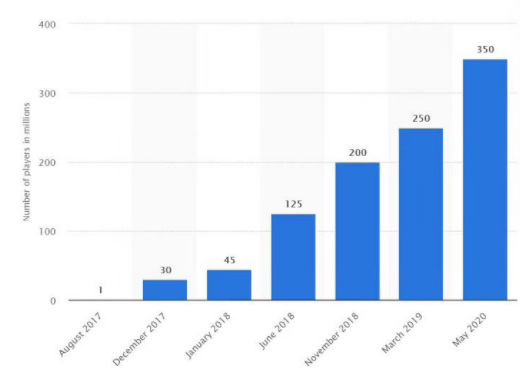 According to the recorded statistics, the highest number of active members in a month is 78.3 million. It was recorded in August 2018. However, they were not active all at once but many people still actively play it. For contrast, Apex Legends gathered around 70m players in Oct 2019, while PUBG hit a 400 million-player peak in June 2018 and 3.24m concurrents in January 2018. For April 2020, PUBG has monthly player count of 886,255. Fortnite: Battle Royale was a free to play game and it first came into the scene in 2017. After the initial launch, it only took less than a year to attract more than 125 million gamers to Fortnite.

Although, the game has received its fair share of dissension from the public for the cartoon style animation. It has done exceptional among the younger ones. According to reports from Statista, there are approximately 350 million registered accounts of this battle royale. However, due to the huge upshot between Apple and Epic Games, the total count may have gone down quite significantly. According to Epic Games themselves, Fortnite on iOS devices comprise almost 116 million players out of the total 350 million. That gigantic loss does not seem like shifting any time soon as long as the legal battle continues. If 2.5 million iOS players are deducted, about 22.5 million people still play Fortnite daily. The future of this game as a mobile app is in doubt. A huge gap of $1.2 billion in the market is not that easy to fill.

Get bonus
© Copyright 2020 Fox-Betting. Bet for fun, when the fun stop - stop